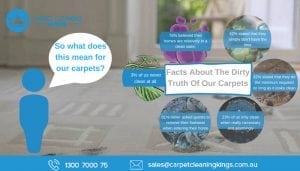 Poor carpet hygiene levels have led to an increase in pathogens and bacteria in carpets, all of which could be putting us and our families at risk.

A lot of people surveyed 76% believed their homes are relatively in a clean state, yet findings showed that we are in fact a nation of dirt-dodgers. 42% stated that they simply don’t have the time to do a thorough clean. While 32% stated that they do the minimum required so long as it looks clean. 23% of us only clean when really necessary and alarmingly, 3% of us never clean at all.

So what does this mean for our carpets?

In some cases, the study picked out dangerously high levels of bacteria including salmonella, listeria, and Shigella as well as an alarming concentration of Campylobacter which causes stomach ulcers. In addition samples of pollen, food particles, human and pet hair, dead skin, and even feces were found. Also an array of mites such as dust mites, carpet beetle larvae, and fleas all of which feed off the hidden ‘stuff’ already lurking within.

Research also showed that only 25% of people admitted to removing their shoes when indoors. 81% never asked guests to remove their footwear when entering their home. Rather, disturbingly 51% of people stated that they’d eat food off the carpet if they dropped it in their own home, yet 76% said that if they dropped food on a friend’s carpet, they wouldn’t.

These worrying facts highlighted the need for professional carpet clean. A third (just over 33%) only vacuum once a week, and 17% admit to only vacuuming when their carpet looks really dirty. Finally, 6% stated that they didn’t possess or use a vacuum cleaner at all.

The reality is that if you’re looking to improve things like air quality and reduce harmful bacteria and pathogens that lurk within your home, then you need to have your carpets professionally cleaned. Vacuuming alone will not remove deep down dirt and bacteria that lurks within your carpet. For your own health call in the professionals at least once a year.

If you feel that it’s about time your carpet needs a  thorough clean, then contact Carpet Cleaning Kings on 1300 7000 75

Using the latest hot water extraction method, and state-of-the-art cleaning equipment, we see to it that your carpet will look fresh and clean.

Complete the form to get your FREE Consumer Guide