To be honest, most of us don’t give a lot of thought to office carpet cleaning unless something gets spilled on the carpet and stains it. Most times it’s a quick vacuum and everything’s alright. Unfortunately it isn’t quite that simple.

After the harsh winter months especially, an office carpet can really take a beating. Over time, dirt and dust get brought in on employees’ shoes and repeatedly stepped on, breaking down your carpet’s fibres and making its replacement an earlier date than you had hoped for. In addition, dirty carpets can lead to bad smells and conditions which aren’t exactly sanitary, both of which don’t bode well for business.

It’s inevitable that employees will bring dirt and dust into the workplace on the soles of their shoes. Make sure there is a tread mat before they enter the office, which will accumulate much of the debris so that it isn’t transferred to the office carpet. However, you also need to ensure that the tread mat receives a daily vacuum as well as the office carpet to remove as much dirt and dust as possible.

When employees are allowed to eat and drink at their desks it’s quite likely that there will be food particles and even drink stains on the carpet. If these aren’t cleaned up right away they can create odours and grow bacteria. Instead, if you have the room, create a separate room which is for the staff to take their breaks in, and provide tables so they can eat there too.

Although it’s easy to see when food has turned mouldy, it’s not the same with a carpet which could be harbouring bacteria and pathogens such as mildew, mould, salmonella, Norovirus and more and you probably won’t realise it. Mildew and mould can form beneath your carpet in environments which are warm and wet and norovirus can survive for a month or more in an uncleaned carpet. To prevent this from happening it’s important to keep your carpet clean and dry.

With the average person shedding almost a million skin flakes a day, it’s quite horrifying to think how many of these could be lurking in your office carpet.

Even when people remember to wipe their shoes before treading on the office carpet there are all sorts of different chemicals which can get stuck to the bottom of shoes – oil from vehicles and lawn treatment chemicals are just a couple which spring to mind. Both of these are bad for the carpet fibres and its appearance.

Finally, there’s every chance that your office carpet is home to a menagerie of bugs. Microscopic dust mites, fleas, and other bugs can be living in the carpet, feasting on skin flakes and dander that falls off human bodies. Even worse, these bugs are known to cause allergies which can trigger asthma attacks in humans.

Although vacuuming your office carpet on a daily basis is a good start it isn’t sufficient to remove and protect your carpet from the various factors listed above. Having your carpets professionally cleaned at least once a year, if not more, is the most effective way to keep them looking and smelling fresh and clean, and also help preserve its life. With spring in full bloom there’s never been a better time to rid your office carpet of allergens and stains which were caused during the winter months. If your office carpet needs cleaning then contact Carpet Cleaning Kings on 1300 7000 75. We’ve been servicing Brisbane and the suburbs for many years and have a wealth of experience.

Complete the form to get your FREE Consumer Guide 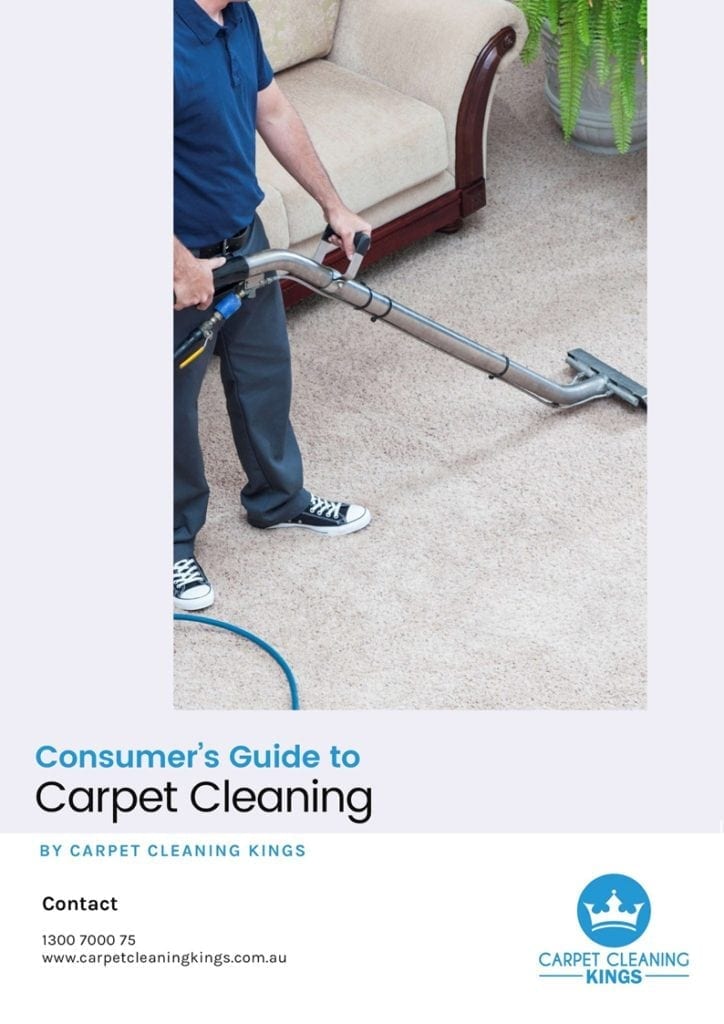